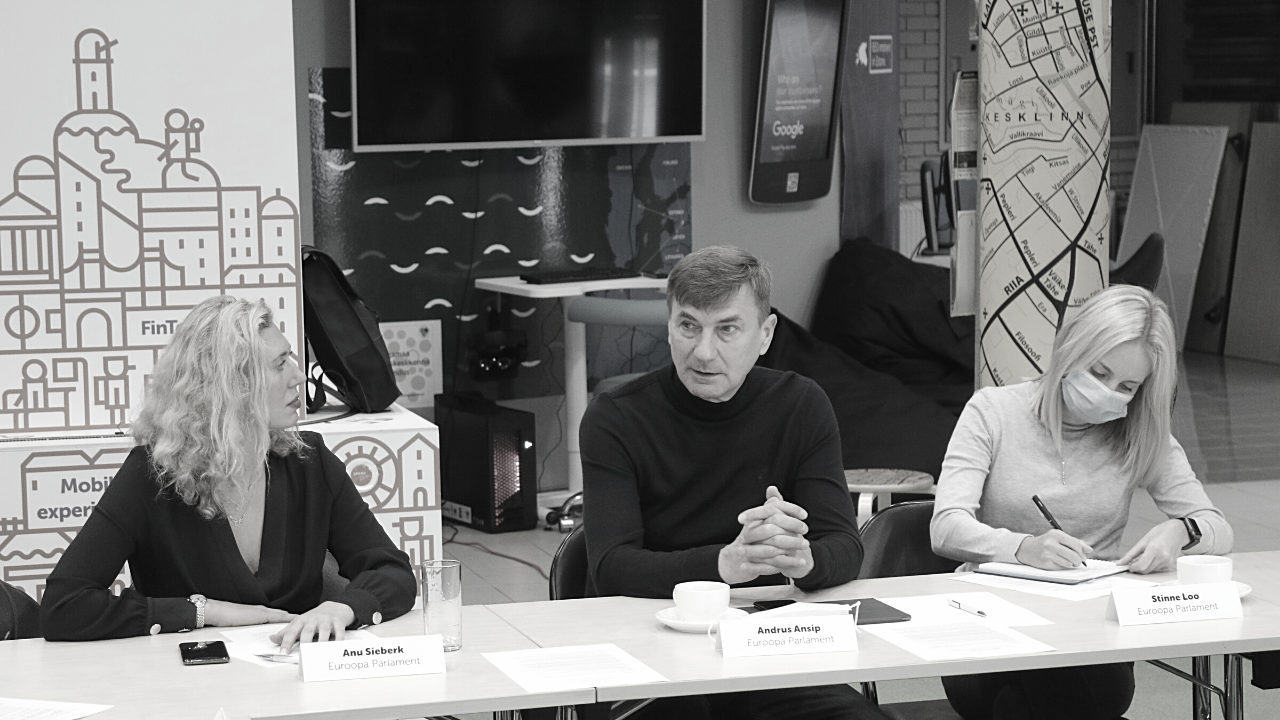 On November 4, the representatives of the European Parliament and the founders and CEOs of Tartu startups gathered at SPARK Demo to talk about the progress of the digital transition in Europe and to discuss effective cooperation opportunities between Estonia and Europe.

At the Special European Council meeting on the digital transition in early October, EU leaders agreed that at least 20% of the funds under the Recovery and Resilience Facility will be made available for the digital transition. According to this, 660 million euros will be allocated to Estonia for the digital transition. Representatives of startups were interested in how this money will be used and what restrictions will be set. The restrictions on the use of money have not yet been identified, but it was clear, that in addition to the development of digital services and platforms, it is important to allocate money to research.

For Europe, achieving digital sovereignty means that there is a functioning digital single market and digital solutions developed. In October, EU leaders invited the European Commission to present a comprehensive Digital Compass by March 2021, setting out the EU's digital ambitions for 2030. According to Andrus Ansip, it is important to fight for a reliable environment where the free movement of data is possible, including between continents. At the same time, data protection rules must be respected, and people's privacy must be protected.

"The main question for Europe is how to ensure that startups have access to high-quality data that would allow them to compete with large companies such as Microsoft and others," explained Ansip. There is currently strong data protectionism across Europe, especially concerning health data. In many European countries, only a family doctor can access certain health data, not even the patient himself, as in Estonia. As a result, access is very limited and databases are fragmented. The situation in Estonia is better, but access to health data is complicated here as well and hinders innovation.

Priit Salumaa, the founder of Mooncascade, gave the example of moving a cancer patient from one hospital to another in a critical condition. A person can be transferred in 4 hours, but an MRI result doesn't get from one hospital to the other on time. "If startups had freedom of action and better access to data, better (treatment) solutions could be developed or problems could be prevented, which would ultimately benefit everyone," said Salumaa.

At the European level, there is a need to create databases that startups could also access. "One idea is to create pan-European sectoral databases," said Ansip. "But then the question arises as to how to stimulate the actual inclusion of data." According to startuppers, fears about data should be reduced first. "A lot of people don't understand the benefits of data and its processing. Industry 4.0 has been a topic for five years and only now is it starting to reach a larger audience, ” explained Martin Vares, the founder of Fractory.

If a large number of target groups do not understand the need for digital data, there is no point in creating complex systems and solutions. "For a large part of society, the IT sector is still an invisible figure and it is not clear for them whether its role is good or bad. As a result, the digital divide is expanding, ”said Triin Kask. All the participants agreed that there is often ignorance and fear behind protectionism. As a solution, there should be better and more thorough communication, illustrated with clear examples.


The deployment of European digital identity

One of the topics was the current state and development of a pan-European digital identity framework. While Estonia has a unified system for digital signing and identification, the rest of Europe does not yet have such a system. "The wider introduction of digital-ID in Europe would be a very good achievement, and the COVID-19 crisis has also drawn more attention to it and highlighted the need," said Ansip.

At the same time, startups see that states and governments must first and foremost have an interest and a willingness to trust these systems. "The Smart-ID signature has been equivalent to a handwritten signature at the European level since November 2018," said Madis Lehtmets, CEO of Remato, who was also responsible for the application's UX design when creating Smart-ID. Lehtmets added that technology and legislation exist, but the interest of foreign countries should be greater. "Here is a good opportunity for Estonia to make the use of digital identity more user-friendly and to be a leader of change," believes Ansip.