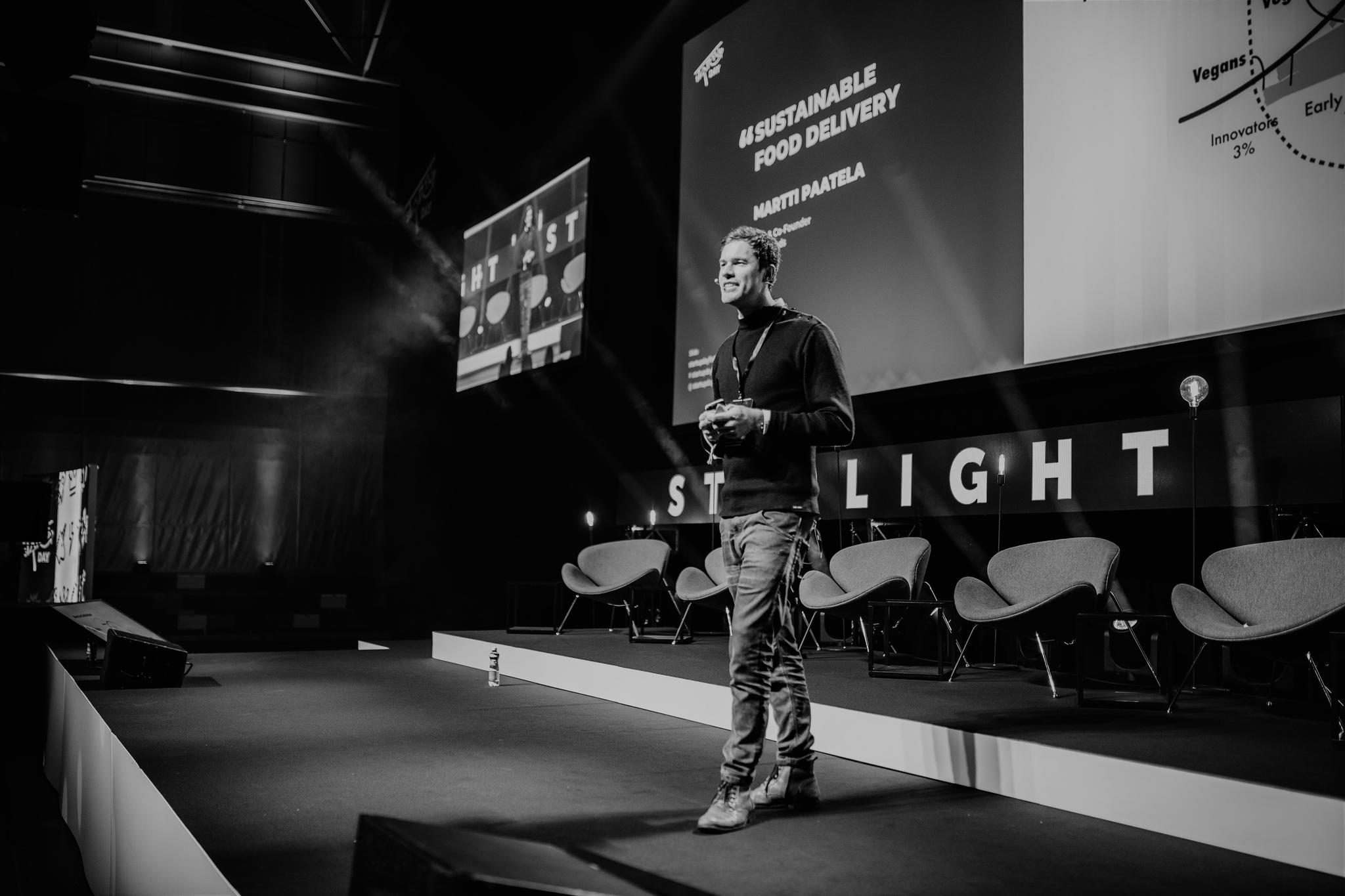 Martti Paatela is the co-founder and CEO at Epic Foods – a restaurant that does not exist. It’s a sustainable food delivery company that aims to replace home cooking on weekdays in a healthy, sustainable and delicious way. He has previously led multiple startup marketing and product teams and has a background in psychology, food and rocket science.

You have a background in engineering physics – why did you choose to get into the food business?

I think the physicist mindset is good for looking at any big scale of problems and trying to find kind of the root causes or the leverage factors that are the most impactful so if you feel certain things there are ripple effects. Food is not just a “fuel me up”, it actually has a ripple effect on your health and is a kind of standard of living because it’s such a large part of your spending. It has also been quite unchanged for decades. So I thought that’s an interesting field and if we can set an example on those changes, we’ll be fixing some of the largest challenges in humanity at the moment. We impact climate change and well-being a lot. Also, we impact the animals, the deforestation and a lot of other stuff that comes with it.

What does one have to have or do to succeed in a startup world?

You need to have certain characteristics, but I think they are secondary to having the passion and drive to fix something that you feel is broken in the world today. But the first qualification is exactly the perseverance, to be able to fall down and get up. The second is energy, so you get other people together. And I would also say integrity because you have to be really honest at every point in a way of building trust in people. And the last in the list would be intelligence, it helps a lot, but it’s not the most important thing.

How did the idea for Epic Foods start?

We were ordering foods to our Asian office in my previous tech company. I don’t think I ever in the 2 years had time cooked. It was so convenient that the food was always available and one click away. Then we came back to Finland and Wolt was just getting started. We just wanted to try out and make agreements with 4 favorite restaurants to deliver their food. And then we started to understand that the restaurant business is not really designed to deliver food. Maybe in the US, but not here.

So if the food delivery will be big then someone should think of how the food should be made for the delivery. The food delivery was just the front end of the apps, working on an old back end, the 100-year-old restaurant business model. So someone should upgrade the back-end and that’s what we started to do with Epic Foods. We started to think about how should you make food that’s perfect for delivery, it’s designed to travel and not eaten right away. Also, it doesn’t need to come from the most expensive central location, so there was a lot of stuff that was going to change.

You won the “Best FoodTech Startup” award at the Nordic Startup Awards in 2018 – what do you think is your biggest strength?

I think it’s our mindset. The way we think. We think very differently from everyone else in the food industry. So there are two chances - either we’re completely wrong and everyone else is right. Or we are right and we might actually be well-rewarded for it. I haven’t seen much of the kind of first principle thinking, it’s what Elon Musk used. Like a real physicist thinking, so that would be our strength.

You said that the challenge with a small company is building a brand – has been the main obstacle with Epic Foods? Do you have any crazy stories that have happened?

Food is really tough. The first challenge was that food is a perishable commodity, so it goes bad very quickly, so if we ordered the wrong amount to the kitchen, we basically made a huge loss because all the food was spoiled. So you need to change mindsets from the tech company founder. Also, you can always build a brand if you have a lot of money. But how do you build a strategy where you can build it without a lot of money or time.

I think we got also a little bit lucky in solving that because we identified this change to plant-based foods. Whereas there are big fast-food brands, there are not a lot of plant-based brands because it’s so new. So because it’s so new we actually have a chance of building brands without investing much. So we are doing more like Oatly way of making it look very cool and fresh. Having them also physically someplace, so we have them at health centers, gyms, and supermarkets, so that’s actually where we get most of our clients to actually try them. We haven’t invested a single euro on marketing but it’s still growing very steadily 20% a month.

When you’re building sth new for the first time in an industry that’s not used to getting disturbed like food, a lot of people are very confident about what works and doesn’t. The distribution company thought our pricing was 2x too high and we had really big fights even internally. Even in our own company. In the beginning. We still did it our way and the price turned out to be one of the key factors of succeeding. It’s almost a little bit crazy that if you just remember to give a chance to the unthinkable ideas then you have a chance of winning something big. And I like it when all the senior executives say that you shouldn’t do it, then I know exactly what I have to do it.

Where do you see yourself and Epic Foods in 5-10 years?

To be completely honest, I think digitalizing the restaurants today in Europe is a little bit early. So the first step that we’re already doing quite successfully is striking large distribution deals and big company customers. In 5-10 years I see us being commercially significant with the plant-based foods and having a good platform for more and more restaurants to join in masses. But it makes sense to really think what’s the ideal path to market. And the ideal path often is not to start at the end-game.

You say you enjoy and thrive at getting the best out of people around you. How to do that? How do you get out the best in a person?

You serve people rather than commanding them. Leadership is not at all about managing a factory where you just shout, command and make sure people do things. But it’s more like you make sure that the people share your mission and buy into the values of you. Make sure that they have enough of the tools and then you can get out of the way and let them figure out how to do it. If you also have good enough management team around you that makes sure the culture and the energy stay good in the company, then you get to be able to flourish. So you get them to give 300% instead of 3% extra. Just an intuitive way of trying to empower them and then getting out of the way and let them do their best.

What’s the key thing people should take home with them from today’s speech?

The key take is “you are what you eat” so you should really understand and try a plant-based diet, at least some days of the week. Because that advances the whole society and makes us develop more of these tasty plant-based alternatives.

And the other takeaway is that if you’re looking for which industry to go into, or looking where to invest or work. Instead of going to the obvious ones like the tech or creative industry, because there you have the biggest competition among the other smart and driven people already, so relatively you’ll have a smaller impact. So take a slightly unsexier industry, which is mostly food - there you can make a much bigger relative impact to others working there.

Martti Paatela is one of the speakers of sTARTUp Day 2020. He talked about "Sustainable food delivery".
Articles you might also like:
See schedule