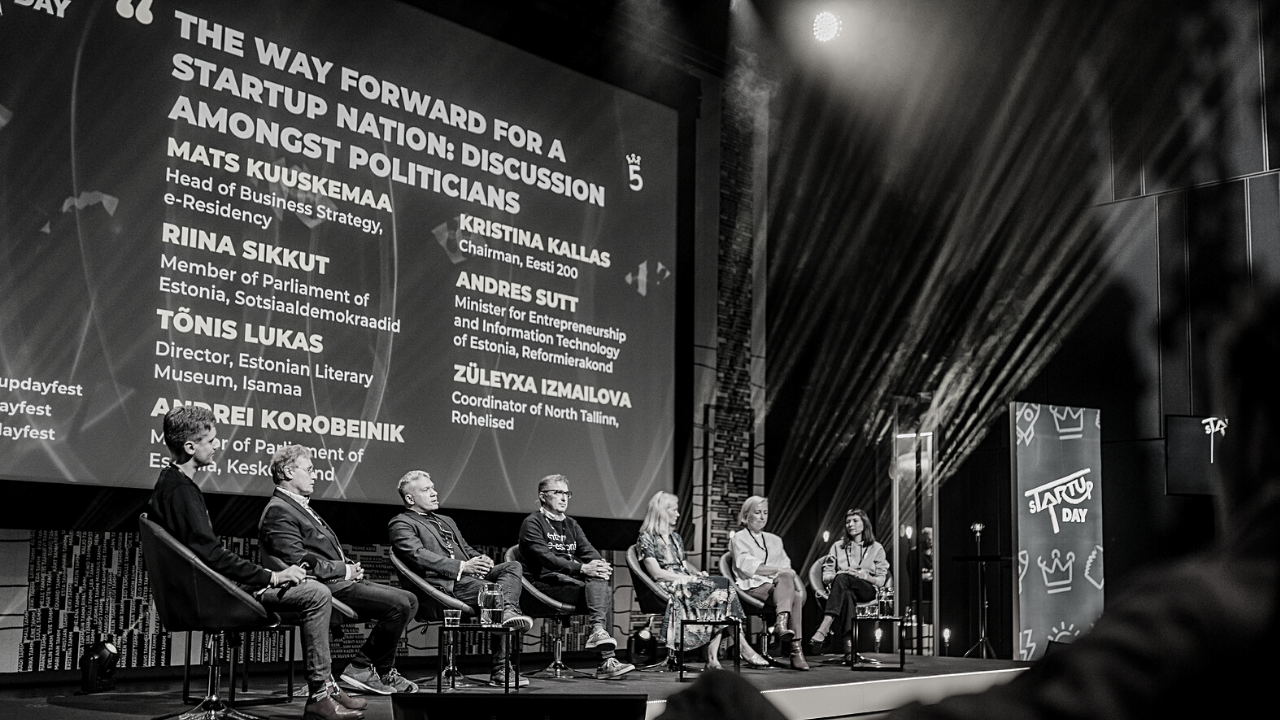 The main topic of the debate was: how the parties would help solve the current bottlenecks in the startup and technology sector. The debate focused on what factors currently hinder bringing foreign talent to Estonia, how to keep our bright minds in Estonia, and how the country could be more tolerant of people representing minorities.

This interview was written by Anette Tiitus, member of the sTARTUp Day Marketing & PR team.
Photos by Mana Kaasik.

In connection with the forthcoming elections, it was relevant to ask the parties how they perceive startups in general and support entrepreneurship. All political parties agreed that startups play a significant and integral role in Estonian society and economy. Startups nudge the country to develop itself ‒ to explore new areas, create new legislation and tax systems. In addition, Tõnis Lukas pointed out that startups need certain stability from the state. "Startups are actively testing solutions that could become a reality. At the same time, large institutions cannot do things so flexibly. In this way, the two sectors complement each other. "


Political parties also see aspects in startups that should be adopted by society in general. According to Riina Sikkut, Estonia should move towards values that are also held in high esteem by startups. Startups direct many resources to their employees' well-being ‒ a comfortable working environment, flexible working hours, and appreciating their people. “Entire Estonia should move towards these values. Citizens are a resource that needs to be invested in.” Greens of Estonia see themselves as having a startup mindset ‒ they have not made a profit and direct all the resources to the development of the party.

Attracting and nurturing talent as a country

Bringing talents to Estonia from other and third countries requires going through a long procedural process. Most of it involves not only the talents themselves but also their accompanying families. How to simplify the processes designed to help people to integrate into Estonian society? Both Riina Sikkut and Züleyxa Izmailova believe that the problem is that, as a country, we lack focus and priorities. "If we say we want to create the best ecosystem for startups and welcome talent here, creating all these exceptions for them is a logical decision." She believes that the right decisions must be the result of testing.

Kristina Kallas also sees the problem in the government's lack of action. In her opinion, the government has become somewhat complacent because we currently have a well-functioning solution that is better than many countries have. Eventually, the consequences have to be addressed by future generations.


According to Andres Sutt, the system is not perfect, but it works. Sutt also points out that the government has invested a lot in the Work in Estonia platform, which helps people to integrate into society. As a founder of several startups, Andrei Korobeinik sees the problem in the fact that Estonia is not an attractive destination for foreign workers as Estonia's taxes on labor are relatively high. Therefore, Estonian startups also open hubs in other countries relatively quickly.

Providing the best education to everyone

Züleyxa Izmailova sees that to solve the problem of the workforce, the country should work closely with the relevant sectors. For example, she highlights the project kood/Jõhvi, initiated to address the lack of software developers. "We have a lot of talent in Estonia. Yet, most of the opportunities to find and improve talent have been created in Tallinn and Tartu." According to Izmailova, profitable jobs are also needed in smaller places. Not everyone wants and can afford life in the capital. "Talent exists but is currently working in a sawmill."

For talents to stay in Estonia, it’s essential to invest in people and provide them development opportunities. Züleyxa Izmailova sees one option in investing in education so that children can acquire high-quality knowledge across the country. Kallas agrees with the opinion. She gives an example of how the results of PISA tests vary drastically across regions. Young people living in larger Estonian cities have better results. “Ten thousand children in the Narva region are currently receiving an education that is not good enough. The talent does not come from there. Talent comes when one gets an excellent university education.”

In addition, the funding of scientists is highlighted as a concern. How to do top research if you do not have enough money for it? Kallas believes that 100 million euros must go to education because people are Estonia's most valuable asset. At the same time, Sikkut thinks that even if these millions were directed into education, it would not work in the current system. Learning in the future must be more personal and based on the child's needs and interests, with a focus on spotting talent, developing skills, and an individual evaluation. In addition, according to Riina Sikkut, we have plenty of intelligent and capable teachers who can adapt to virtual lessons and come up with developmental tasks for children. "If we put all these aspects together, we will be able to create a system that is supportive and sustainable," says Sikkut.

According to Andres Sutt, money from the private sector should instead be employed in education. As the Minister of Entrepreneurship and Information Technology, he has visited almost all Estonian counties and got acquainted with the local entrepreneurs in the past six months. "We have a lot of awesome companies in different fields, such as manufacturing or software, with a great share of exports. Nobody talks about them.”


Speaking of financing opportunities, Sutt thinks we have to look towards the private sector because many large companies bring their production to Estonia, investing in Estonia's economy and creating hundreds of new jobs. He mentions the Volkswagen Group as an example, which has brought its global IT portfolio management to Estonia. "These are the fields of the future. Fields where the money is born to support talent,” says Sutt. He, therefore, believes that the investment should come from the private sector and not from the government, as today the state directs 1% of its budget to R&D activities and the private sector 0.7%.

To reduce society's intolerance towards minorities, almost everyone agrees that Estonia needs leaders who can unite the people. A multicultural environment only enriches society. Tõnis Lukas' comment summarizes the topic well. “I liked Urmas Vadi's comment when he was asked who a real Estonian was. Vadi replied that a real Estonian wants to be an Estonian. It is not someone else's determination but the individual's own will."